Honorary Title and Certificate of “National Outstanding Contributing Scientist”, and Medal of First-Class Hero and Model 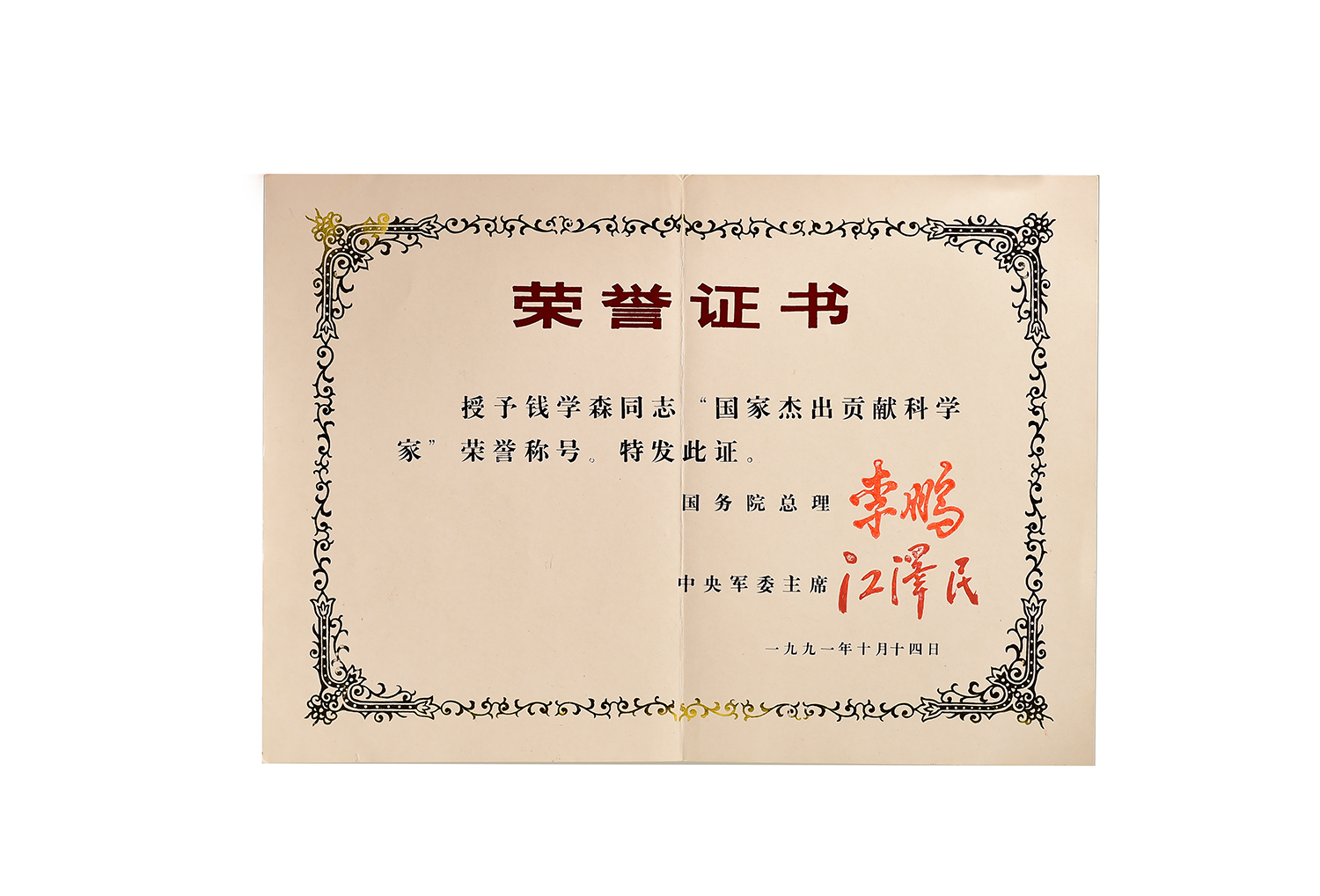 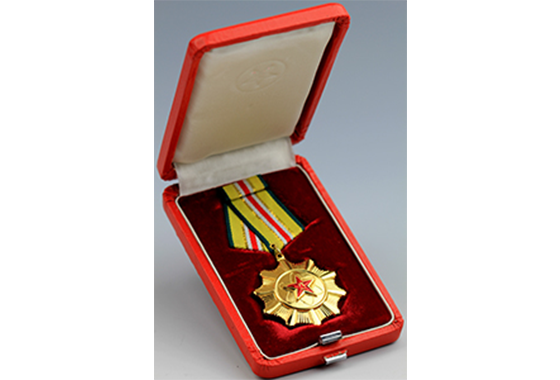 Qian Xuesen gradually retired from the forefront position when he was very old, began to spend most of time in study room, and explored new knowledge quietly far from the madding crowd. However, he had made great contributions to scientific progress, China’s prosperity and happiness of the public, which caused him to receive many prizes and honours after his retirement from the front line in spite of him not seeking for fame and wealth, yearning for knowledge wholeheartedly.

Undoubtedly, the most famous prizes that he received were “National Outstanding Contributing Scientist” and Medal of First-Class Hero and Model” in October, 1991. It was the first time that the State Council and the Central Military Commission had conferred the highest state-level title for a scientist since New China was founded. We can say this was the most important and the highest among the prizes that Qian Xuesen received.

We can see the certificate of that honorary title in the glass showcase at the end of No.3 Exhibition Hall. We can watch the videos “Deep Affection”, and “Qian Xuesen –People’s Scientist” separately at the end part of No.4 Exhibition Hall, and within the document room on the second floor, and learn about some relevant literature and the prize-awarding ceremony.

On October 16, 1991, the prize-awarding ceremony was held in the Great Hall of the People. Jiang Zeming, former General Secretary of the Communist Party of China, former Chairman of Central Military Commission, and Yang Shangkun, former state president, and other state and Party leaders attended the ceremony. Nie Rongzhen, Deng Yingchao and other revolutionaries of the old generation delivered their letters of congratulation.

“Qian Xuesen was an internationally known scholar when he studied and worked in the US in his early days; he lived a good life and had a well-paying job. However, soon after the New China was founded, he firmly returned to China for nation-wide construction despite waves of barriers. He showed lofty national integrity and his yearning and love toward the emerging socialist cause.”

“It is fair to say that Qian Xuesen was the model representative of patriotic highbrows in our country and his experience indicated the correct way of modern Chinese highbrows to make progress.”

Qian Xuesen received the honorary certificate and a bunch of fresh flowers among warm and joyful applauses. He still smiled in a relaxed way and showed modest and kind expression. Qian Xuesen went around the stadium and shook hands with all the attendants. When all that was done, he went to the microphone and made an extemporaneous speech.

He expressed his thanks for the lofty title that the Party and the People awarded him, for the leaders and all the workers who trusted him, cared about him and supported him.

Qian Xuesen stated, “What I have done for the development of the science and technology cause of New China could not have come into play without the correct leadership of the Party and the wisdom of all my fellows. What I have done is just a drop in the bucket. The Communist Party, the People and our nation are great in fact.”

His speech was sincere and came from the depth of his heart, fully reflecting the broad mind of a Communist Party member. Qian Xuesen never forgot his original intention to study abroad and always remembered that, as a Chinese, his career, achievements and destination of life were all in China.

“I tried my bit to construct our country with all Chinese people and to make my compatriots live a dignified and happy life.”

Those words that Qian Xuesen said to reporters before leaving America gradually appear one by one in the blank “letter paper” hanging in the end of NO.4 Exhibition Hall. Qian Xuesen verified his oath with his lifetime conduct.